Edgar Balthazar was the faithful and long-suffering English butler of Madame Adelaide Bonfamille and her cats, managing the day to day business of her home in Paris. In 1910, while eavesdropping on Bonfamille and her attorney, Georges Hautecort, detailing her will, he discovers that she is leaving her entire estate to her cats upon her death, to be granted to Edgar only after the cats' natural lifespans.

Not wanting to wait the requisite lifespan of the cats, he instead devises a plan to abandon the cats, and thus, leave Bonfamille with no choice but to name him her beneficiary. He drugs the cats one night, intent on leaving them in the country, where they have little chance of finding their way back home.

However, his plans are poorly executed, as he encounters two dogs (Napoleon and Lafayette), who delight in tormenting him. Because of their distraction, Edgar loses track of the cats. Leaving behind his hat, his umbrella, and the sidecar of his motorcycle, he returns to Bonfamille's home, leaving her none the wiser as to the fate of the cats.

Over the next few days, amid private sessions of gloating, he discovers that the cats have returned. Intent of keeping the cats away, he captures them in a sack, and packs them in a trunk to be delivered to Timbuktu. However, a team of alley cats intervene, resulting in Edgar being the one trapped in the trunk, and the cats being free.

Edgar is believed to have run off by Bonfamille and Hautecourt. It is not known whether he was eventually discovered prior to the trunk being shipped to Timbuktu, or if the trunk made it in tact. As the trunk did not have any noticeable air holes, it is not certain if he would have survived such a trip. He is either avoiding Parisian society altogether, or is deceased. 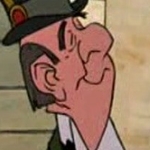